We have added some new features to the Trains page in the game.

Also on the Stations list we have added some more information for you.

You'll notice that now we show you how many of each cargo type get supplied or demanded on a particular day.

Also we added a shortcut on the station details dialog to the trains for that station. 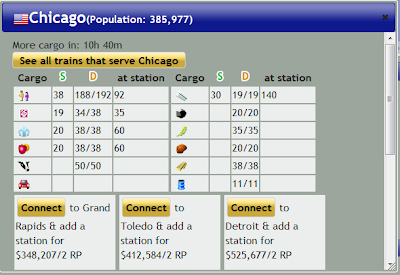 These changes were a direct result of feedback posted on the forums, so if you have any feedback, suggestion or comments please go to the forum and post them there. Also the forums are a great place to meet and talk with other player's of Railroad Empire.

Posted by Michael Robellard at 9:44 AM 20 comments:

Yes, it's finally here, and no I am not talking about the new iPhone either. Railroad Empire has just launched its newest version. We have added a ton of new features and we have a completely new and upgraded look and feel. Most important of all we aren't done. Railroad Empire has always taken an iterative approach to development and we highly value your feedback, we try and answer peoples questions and take user suggestions into account when making changes. So please let us know what you like and don't like so that we can continue to make Railroad Empire better.

So what's new?
Missions are the big new thing in Railroad Empire. Each day you will be given new missions that you can try to complete, upon completing a mission you will be given a reward. Board of Director Points are among the rewards you may receive, and we planning on adding more rewards for mission completion in the future.

Filters and searching in the cities/station screen are another of the big new features. You guys have been asking for this feature since the beginning and I promise I heard you all along, it just took a long time to get to it.

New look and feel. From the bottom up we have changed the look of the game, I actually hired an excellent graphic designer who worked with me to completely redo the graphics, there are still a few places where work needs to be done, but I think everyone will be happy with the new look.

What's coming?
We aren't done yet, Today's release coincides with the Facebook requirement to support secure browsing for Facebook apps. Over the next couple of weeks look for a newsletter, a weekly railroad report, cargo filters on the map, new map graphics for the routing page, and availability in the Google Chrome Webstore as well as on other game portals.

Please keep the wonderful feedback coming and keep listening to this space for a lot more exciting news. Together we are going to make Railroad Empire the best Train Game / Railroad Strategy game ever.

Facebook recently changed the width settings for Facebook Applications allowing them to use more than the 760 pixel width that was allowed before. We have changed the settings in the game and you can now use more of the width of the screen for your Railroad Empire game. 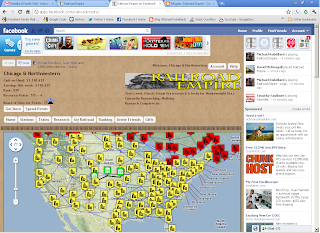 There will be more great things coming soon for Railroad Empire, so follow this blog to keep up.
Posted by Michael Robellard at 2:39 PM 1 comment:

Interviewed at IT Martini

Today we have released the latest version of Railroad Empire. There are a lot of changes today and most of them are related to the game's infrastructure and not the mechanics of the game. Below I will be highlighting each of the changes.

Standalone Version
We have also released a standalone version of the game. You can now play the game without the Facebook Canvas. There are two options here. You can create a new game using your Google, Yahoo, AOL or other OpenId account or you can simply login to your current game using your Facebook Account. Also there is a  link the In Canvas version of the game at the bottom of the page that says "switch to standalone".

In the standalone version you have the full width of your browser for the game, as well as a slight speed increase. Also the payment system is Super Rewards instead of Facebook Credits. What happened to Tapjoy you ask? read on.

Fixed loopholes and bugs related to multi-unit consists
When we released multiple units consists, there were a number of small bugs and loopholes that caused engines to disappear under some circumstances as well as allow you to buy engines you should not have been able to buy. We have fixed these issues.

The Future
This month is the 1 year anniversary of launching Railroad Empire. We still have a lot of exciting stuff coming soon and we are excited about the coming year. Keep listening to this space for more exciting news.
Posted by Michael Robellard at 1:09 PM No comments:

Google App Engine, our hosting provider will be conducting maintenance on Wednesday April 20, 2011 from about 5PM to 6PM. The game will be unavailable during this time. This is the time the maintenance is scheduled for, but last time they had maintenance it went over about half an hour.

In other exciting Railroad Empire News
I have placed the first phase of our project to allow non-Facebook users to play the game in public beta. This first phase allows users to play the game with their Facebook credentials on the standalone version of the game without the Facebook stuff. The advantage of this for current players is that you get much more real estate for the map and for the various tables of data. It is also noticeably faster.

If you would like to take the beta for a test drive visit:
beta.therailroadempire.com/login

The next phase that I am currently developing will allow users with Google, Yahoo, AOL, MSN, etc... to play the game without having to have a Facebook Account.

The final phase of this project will be to make it so that Players playing the game on the Facebook Canvas will use Facebook Credits for purchases.
Posted by Michael Robellard at 9:39 AM No comments:

Last Sunday we released a new version of Railroad Empire to the public. The release had been available on the Beta server for a while, but its many ins and outs are new to the non-beta players, so we will recap the features here for everyone's information.

The first feature we'll talk about is Train location. With the new release each of your train's locations are plotted on their routing page when you open the page up to edit a train. The location of the train displays as a black icon along the tracks the train is using. The position will display whenever a train is running or waiting at a station for cargo. If you stop a train it will no longer have a position.

The next feature is Multiple Unit Consists. Once you reach the heavyweight era you will see a message on the routing page that you can research Multiple Unit Consists. Once you have completed that research an Add Engine button will appear under the current engine. You can use the button to buy a new engine or select an engine from storage to add to the train. That train will now have two engines pulling it. This has the effect of adding the pulling power of the two engines together. In addition, if the engines are diesel or electric engines you will receive a $1.00 per engine discount to the maintenance cost. This reflects the fact that you do not need an extra crew to man the extra engine.

Related to the Multiple Unit Consist feature, the replace engine button can also select an engine from storage. An engine is storage is an engine in the train list with no route.

Also on the routing page we added the often asked for run once option. By selecting this check box the train will run from stop 1 through to the last stop and stop running. This option is useful if you want to run an extra service along a route and don't want it to run over and over again.

One more thing you will notice is that many of the buttons and dialogs have changed their looks. We have replaced a number of custom written controls with a standard set of controls from out javascript library that we hope will reduce the number of UI related bugs.

Finally you will notice that we have added paging to the train list. A number of users have very large numbers of trains and that was causing memory issues with our server hardware so we have taken that page and broken it up into multiple pages. We have given players the option of selecting a page size of 20, 50 or 100 and the ability to move between pages easily. In the future we plan on adding the ability to filter your trains by various options such as Station and Waiting for Cargo.

We have a lot of new features planned so watch this space to keep up with the latest Railroad Empire news.
Posted by Michael Robellard at 6:44 PM No comments: